Apps live and die on their traffic. And on the modern web, the majority of traffic comes from search engines and social media. If you want your site to be seen by anyone, then you need to design for SEO and SMO — and that means pre-rendering your app using static or server rendering.

Imagine if Facebook sent all its data and JavaScript code with each request. It’d break the internet. Indeed, if you take a look around the industry, the vast majority of real-world apps rely on some kind of asynchronous data — whether it’s fetched from an API, pulled from a database, or dynamically imported from code-split bundles. For the most part, React handles this asynchronous data pretty well; hooks or lifecycle methods make it easy to show a loading spinner until the data is ready. But there’s a catch.

Outside of the browser, hooks and lifecycle methods don’t work so well. This is because React takes a completely different approach to rendering; on the browser, you call ReactDOM.render(), while on the server, you use ReactDOMServer.renderToString(). And while renderToString() will happily render your page’s initial content, this doesn’t help when the initial content is a loading spinner.

What about React Suspense?

Suspense is a new React API that allows React to suspend rendering until something happens. When Suspense for Server Rendering is released, it’ll become much easier to statically render asynchronous content.

Of course, Navi does much more than waiting for content: it also gives you a way to compose mappings from URLs to data. Suspense will just make Navi’s job easier. In fact, Navi already uses Suspense to wait for the initial render!

Now as you probably know, the React ecosystem does have a number of tools that help with pre-rendering and asynchronous data. For example, Next.js gives you getInitialProps(), and Gatsby lets you hide the entire filesystem behind GraphQL. And while both of these approaches work, they’re super complicated. They have their own framework and build systems, and are full-fledged ecosystems in their own right. Which is great and all, but…

What if all you really needed was a way to get your page’s content before calling renderToString()? 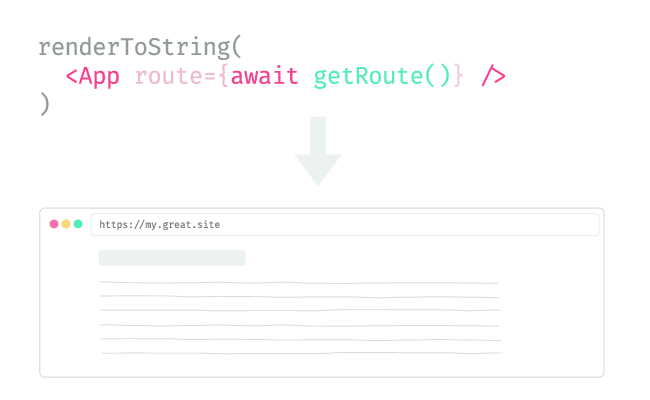 Navi is a JavaScript library for mapping URLs to content; it’s a router. But Navi has a difference from other routers: the content can be asynchronous, and it can be anything. It lets you map URLs to data, views, or even HTTP headers — and then lets you easily compose these mappings. It makes getting all of a URL’s content as easy as waiting for a promise to resolve.

The above example demonstrates why static and server rendering is so much easier with Navi: it moves your routing and initial data fetching code out of synchronous React components, and into async functions.

Of course, in a real app you’d also need to deal with:

Navi is flexible enough to handle all of this, but it again takes a different approach to existing frameworks. Where possible, Navi integrates with existing tools and libraries: